What gives us our energy, is behind the origin of two sexes, and directs our ageing and death? The answer in each case lies in mitochondria.

Mitochondria are tiny structures located inside our cells – miniature powerhouses that use oxygen to generate power. There are hundreds of them in each cell, some 10 million billion in a human being. Once considered menial slaves, mere workhorses for complex cells with nuclei, their significance is now undergoing a radical revision. Mitochondria are now seen as the key ingredient that made complex life possible at all.

For two billion years, bacteria ruled the earth without ever generating true complexity – a stasis that may still grip life on other planets. Then the union of two bacterial cells led to an evolutionary big bang, from which algae, fungi, plants and animals emerged. For mitochondria were once free-living bacteria, and still retain unmistakable traits of their ancestry, including some of their original DNA. Ever since their fateful absorption, the tortuous and unpredictable relationship between the mitochondria and their host cells has forced one evolutionary innovation after another. Without mitochondria, nothing would exist of the world we know and love. Their story is the story of life itself.

Today, mitochondria are central to research into human prehistory, genetic diseases, cell suicide, fertility, ageing, bioenergetics, sex and the eukaryotic cell. Piecing together puzzles from the forefront of research, this book paints a sweeping canvas that will thrill all who are interested in biology, while also contributing to evolutionary thinking and debate.

This is a book full of startling insights into the nature and evolution of life, and should be read by anyone who wants to know why we’re here.

In the primordial unfertilised egg cell the mitochondria encircle the nucleus (in blue) in discrete rings, separated by membranes. A dialogue between the nuclear and mitochondrial genes appears to take place. The requirement for one set of mitochondria to work with one set of nuclear genes means that sperm mitochondria are excluded from the fertilised egg; and this is why we need to have two sexes – the female provides mitochondria tuned to a particular nucleus, while the sperm are adapted to exclude their mitochondria from the next generation.

Part 1. Hopeful Monster - The Origin of the Eukaryotic Cell

Part 2. The Vital Force - Proton Power and the Origin of Life

Part 4. Power Laws - Size and the Ramp of Ascending Complexity

Part 5. Murder or Suicide - The Troubled Birth of the Individual

Part 6. Battle of the Sexes - Human Prehistory and the Nature of Gender

Part 7. Clock of Life - Why Mitochondria Kill us in the End 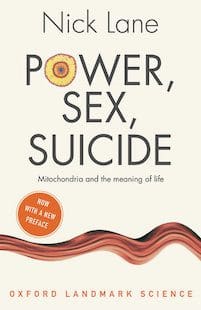